A few years ago I learned about a ‘new-to-me’ method for propagating plants – it was called the ‘Forsythe Pot’. The Forsythe Pot method is a way to propagate plant cuttings. Someone named ‘zuzu’s petals’ posted a helpful tutorial on PlantSwap.net..

Instantly, I needed to learn more. Researching, I found a Forsythe Pot tutorial that goes a bit beyond the usual stem cutting that most people know. There’s a very good blog post with lots of information. Check out the Garden Geeks blog.
http://www.thegardengeeks.net

After doing a bit more research I assembled the supplies to make my first Forsythe Pot. It was a success! I made several more and now have a way to root as many cuttings as I care to. Sharing plants with friends is fun and easy. Since learning this method I have been giving away as many as 300 plants each year.

Curious to know how many plants I could propagate by this method, I purchased a single plant for $3.50 and began taking cuttings. From a single small pot containing one Alternanthera plant, I was able to propagate 99 new plants. Here you see the Forsythe pot on the right and the cuttings that rooted in only 17 days. Some plants root more easily than others!

And here are more clones of the single plant ready to share with friends. One new and unexpected thing I learned during this experiment is that adding limestone and changing the exposure to sunlight can have an effect on the coloring of the foliage. 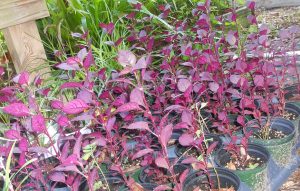 After gaining some confidence I wanted to share my knowledge with others. To my mind, I believed there was one small change which could be a big improvement for those who keep their Forsythe Pots outside where the nasty mosquitoes are looking for water. Writing as ‘greene’ this was my first article about a Forsythe Pot.

Like most other folks who share information on the internet, I have been calling this a Forsythe Pot. But I was curious why I could not find a link which indicated where the name ‘Forsythe’ came from and why it was spelled ‘Forsythe’. Was it named for a university? town? garden club? person?

It took me a while, a very long while, but I finally tracked down the answer. Had to use a time machine and go all the way back. Drat, I just missed the opportunity to use the Way-Back Machine, didn’t I? Let’s go all the way back to 1835.

Oh, here it is. June 1835. Andrew Forsyth submitted an article to the magazine. See, there is no ‘e‘ in his surname! Mr Alexander Forsyth, from Oakhill Gardens, explained his ‘new’ propagation method in an article submitted to a gardening magazine. Searching further, I finally found the article on Google Books: ‘The Gardens Magazine’, later named ‘The Gardner’s Magazine, by J C Loudon. It is now a free e-book; Mr Forsyth’s June 8, 1835, article is on pages 562-564. In the article, Mr Forsyth gives detailed instructions, includes drawings of his method of propagating cuttings; also includes an explanation of how he sieves, grades and cleans the sand he uses to fill the pot.

But why is the name spelled as ‘Forsythe’ in so many places on the internet? Perhaps many people have been influenced by the Forsythe Saga on television. Or could this have been a typographical error in 1835? No, I see that his name appears on other issues of the magazine and always spelled as Forsyth. So, with your kind permission, from now on I will use the spelling Forsyth when I refer to this method of plant propagation.

Why not give the Forsyth Method of plant propagation a try? Don’t overthink. Get out there and propagate something!  Just do your own thing, take photos and keep notes, share your experiences. Eventually, it will come together – and with any skill, it won’t take 178 years!