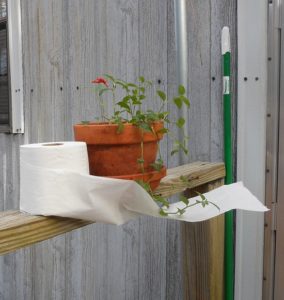 Was it 1966? A friend of a friend was looking for temporary workers, just a few. Seems there was a new fad in town – terrariums. He did the math; tall glass vessel + soil + a few small plants = cash for college. He set up a kiosk at the local shopping mall. To call it a mall is laughable compared with today’s monstrous shopping arenas. His terrariums were selling fast and he couldn’t keep up with demand on his own. He needed help and he needed it fast…and cheap.

So we stood in his garage, a motley crew of skinny teens. If you’ve ever attempted to assemble a terrarium you’ll soon discover that you are all thumbs and elbows. We were paid fifty cents for each completed terrarium – and we worked quickly. We soon developed little tricks to get those feisty plants tucked inside the tall glass containers. We used wire, forks, anything that came to hand. One particularly busy day, our ‘boss’ thoughtfully supplied a lunch of Chinese take-out and we discovered that chopsticks could be modified and fitted with all manner of appendages to aid us in our task. Our creations were selling for five to ten dollars each.

A short time later, I started working at a real job. After school and weekends and full time in the summer, I was a floral designer. At work one day I was holding up my end of a friendly conversation and I remarked how industrious that young college student had been to start with nothing and develop his own terrarium business. My boss, who had been in the floral business forever, commented, “Well, the young man knew what he was doing; his mother owns Lola’s Flower Shop across town and is our biggest competitor.” Oops!

A few years later, walking through the same mall, I passed a display of lush hanging plants. A few sprigs had fallen to the floor and were doomed to be victims of the broom. I picked up an extra long piece of some unknown plant, playing with it as I walked – twirled it, threw it in the air, wrapped it bracelet-like around my wrist, then stuffed it into a pocket. With my vast experience manufacturing terrariums, I had big plans to make a terrarium of my own with that little sprig.

Arriving home, I stuck the little plant sprig in some water, set it on the windowsill and forgot all about it. Later I did manage to create several terrariums of my own, but the little plant never made it from the water into any of my terrariums. Weeks later, when I looked at the little plant, it had quite a nice bunch of roots, so I planted it in a pot.

That little plant has been through one marriage, two apartments, 3 houses, two children, one divorce. The still-unidentified plant usually lived in the bathroom and, for lack of a better name, it was known as ‘the bathroom plant’. The plant traveled along with me when I moved to South Georgia. Imagine how surprised I was to find that the lush, green weeds growing all around my new home looked suspiciously like the bathroom plant.

The research revealed that my little plant had a name, a proper name. Tradescantia fluminensis! Sure, it still lives in the bathroom; it’s happy there. But on days when the rain is gently falling, I set it outside to have a little shower with its Southern cousins.